Inland Empire is David McNeill’s column about world building, CRPG’s, love, loss and many other kinds of literary vulnerability.

The east wind rolls in over the eaves, a cool promise of the bracing winter to come. It’s late - too late for me to be awake, but sleep and I haven’t agreed on our procedure at my new apartment: the curtains aren’t quite where they need to be, the bed frame is a few inches too far to the left. And so Bill Withers echoes from my speakers, rolling onto the balcony, just loud enough to hear, not so loud to wake the neighbours. The downlights and lamps across the way have dimmed to nothing. And yet, to my right, picked against the silhouette of the city skyline, an LED billboard is up with me. Advertisements roll and flicker. An ad for viagra followed by an injunction to gamble on our upcoming federal election, then a suggestion to take a toll road, rendered inert by its own irony and existence. Then a lie about how taxes and the economy work sponsored by the ruling class of the country.

The billboard breaths lightning, indifferent to us: it is incapable of caring that everyone in the building is asleep. That the couple two blocks over are yelling at each other, fueled by some substance or another. It is cold and indifferent, occluding the distant orange tiles running up the skyscrapers and office buildings. Indifferent to the red eye that watches from atop a crane, scheming some new development.

The billboard is advertising to everyone for no one. Check it out, slick, some products we invented for you, delivered right to your apartment, free of charge. You’re welcome, slick.

I have been preoccupied of late. Buying an apartment, moving, dating again: all of which are efficient at rendering art their first victim. It’s difficult to set time aside to write when you’re busy almost dropping a fridge from a trailer with Pat while sweat beads above your eyelids, blurring your vision. Difficult to work out that big structural issue in book three when you’re focused on where her family is from, whether her smile gives you butterflies or pterodactyls.

In an effort to continue research for my third novel, I’ve been consuming every piece of pirate media I can: novels, tv shows, films, video games. And, inexorably drawn to the most trigger-action series of all time, I started replaying Assassin’s Creed IV: Black Flag. Black Flag is an open-world pirate game that follows Captain Edward Kenway, a rogue pirate set on making enough money to become legitimate and return to his love in Wales.

The story is a series of formulaic, repetitive loops: Captain Kenway seeks a grand prize with his comrades, and succeeds, but fails to share his comrades’ values. Over and over. He is betrayed but comes back. Over and over. For the most part, the narrative rarely punishes Captain Kenway. His charm and wit are enough to keep me playing, and so too keep the narrative moving. It is hard to dislike Captain Kenway - he feels every part the privateer turned scoundrel in it for himself with a heart of gold. Matt Ryan turns in a career performance second only to Constantine to bring Captain Kenway to life.

And yet the game is repetitive, grinding. Hour after hour I sail for a destination, waylaid by frigates and schooners. I destroy them each, board them, take their riches. Upgrade my broadside cannons. My hull. My harpoons. And inch forward, interrupted by a Spanish galleon. I start a mission, win the day, and Captain Kenway fails to grow. I head to my next objective, halted by a Man-o-War. I best it, inch on. The next mission Captain Kenway doesn’t change. Rinse. Repeat. Rinse repeat. And yet I’m enjoying myself. Incrementally improving the ship, one part at a time. The crew hollering shanties as we travel. I climb from a small island, and the crew cheers my name as I board.

Moving house in the humid, Brisbane rain is what I imagine crossfit feels like. Everything is heavy and urgent as you make a dash for a break in the weather. You lose your grip as sweat rolls from your wrist onto a box mid-stride. You punish yourself with no end, apparently for the joy of it.

And you tell yourself that next time you need not: just hire someone to move your things. Just do that. But, that lingering voice of your childhood reminds you, that’s frivolous. A waste. What would your mother think, who made grilled cheese night a treat because we couldn’t afford anything else for dinner. What would seventeen year old you think, who sweated in a kitchen for cents on the dollar?

An absurd comparison. You know this, even as you try to walk the washing machine from the trailer bed to the tray’s edge, catching a foot on the moving blanket, the broadside striking your shin with a report so loud Pat wonders if you’ve broken your femur.

You do this four trips in a row. The humidity gets worse. Pat looks exhausted. You feel thin, barely there.

As the story goes on, Captain Kenway doesn’t grow so much as his interests diversify. When his quartermaster leaves the crew, he’s forced to confront his own ambition. Not so much that his lust for gold and wealth is wrong, but that it’s the wrong kind of gold and wealth. The game suggests that Captain Kenway’s noble desire for a stately life at all costs is betraying those around him: you’re only using us for your own means, many people tell him.

And while this is true, it’s the sort of true that someone who just watched Fight Club is capable of. Yes, Captain Kenway is using his crew mates and colleagues - that is, after all, capitalism. The agreement to exchange time and energy for goods and services. The assertion that he is trying to aggregate the wrong sort of wealth for the wrong reasons is accurate, but disingenuous.

He is no better or worse than his pirate comrades functionally, and yet the secular brotherhood of pirate morality damns him. In being one of “them” but not the right kind of them, Captain Kenway is… well, everyone.

Even as he learns and grows and ultimately forsakes wealth to do what is right, he is us, the every-person. Captain Kenway comes from nothing. He holds no allegiance but to his love and to himself. Faced with the brotherhood of pirates and Nassau and the legacy of the high seas, he is dwarfed. Made nothing in the face of their ideology and the unobtainable virtue of the Assassins. Yet he persists, Captain of the Jackdaw, making difficult choice after difficult choice.

The wrong choices? Sure, who doesn't make those? But he chooses. And that is, ultimately, what the story valorises. What it celebrates. “Nothing is true, every is permitted” is the franchises titular credo, and Captain Kenway is exactly that. A man who takes his free will and carves his own destiny, for better and ill.

And, as I scuttle ship after ship, vaguely disinterested, waiting for the next story beat where nothing will change, the game resolves its dissonance. Captain Kenway does not make the right choices by accident or chance. Inch upon inch of sail and leagues upon leagues of sea stand between us and the change - to progress in the story we must do the dull, unpleasant hygiene of gathering resources, putting them to use, gathering more. Rinse. Repeat.

I’m unclear if it’s the balance in Black Flag that succeeds where subsequent titles fail, or if it’s the genius of naval warfare or the charm of the setting. But the incremental monotony of the bits in-between make the growth of Captain Kenway and his crew rich and rewarding, and ever-charming.

My laptop confirms its quarter to Midnight. I can hear a distorted voice that ricochets from the street into the space between the railing and roof of my balcony. Obscured in a hoodie, a woman speaks on her phone, pacing back and forth below me: respect, reflection, plan, living. Her words come in and out of focus, snapshots of an argument that is just far enough way to dissolve into the quiet groove of Withers on the record player, but not so much that she's lost entirely.

Apartment buildings like this are strange artefacts. Each of us in our little cement containers, living our little lives, interfacing in the elevator and car park. Forced together by a 9pm fire alarm or a mix up in booking the rooftop barbeques. Not so much profound as elemental.

We are, all of us, consumed by the weight of our own concerns: our jobs, our health, our weight, our loves, our fears, that blonde girl with the big green eyes and careful way about her. And yet, for flashes, we are together in this building. The lift is taking too long. The fire alarm was obviously someone burning toast and now we’re all standing on the lawn like a bunch of idiots. That new tenant on level 5 is the worst and I wish he’d stop slow cooking fish, it really stinks up the hallway.

For as much as we each leer out from our own boxes at the flickering, indifferent billboard full of lies and sales and erection pills, we do it together. For as much as we tolerate the endless selling of useless fabricated shit, we also look up at the empty sky together. The gold of the moon that eeks from behind the clouds, preparing to make an appearance after weeks of continuous rain and humidity and misery. The merciful moment where that one neighbour stops playing house music and goes to bed.

Above all, we share the silence. The moment in the small hours once the woman in the hoodie has hung up the phone and gone inside. The minutes after the couple a few blocks over retire, their argument stowed, mistaking accord for reconciliation. When the record reaches its end, and Mister Withers spins down - may he never be forgotten. When all the cars are safe in their homes and all the people are safe in their ports.

We share that silence. And yet, beyond the shutters and curtains, the billboard goes on, indifferent, a constant reminder that peace is not ours to enjoy. Rinse. Repeat. That silence is temporary. Rinse. Repeat. That as we enjoy our collective agreement of silence, the machine rides the lightning wires over the bitumen and over the Toyotas and Mercedes and Teslas. That the machine is relentless, limitless. In the face of the forever fountain of information and erection pills and gambling and bullshit, we all agree to shut up for eight hours. Let each other pretend the machine is not there. Pretend everything is okay, quiet. We are nothing if not absurd.

We are nothing, if not absurd.

Playing Demon's Souls when your life is already a numbing, beautiful cycle

The Last of Us Part II (1/2): Unverified Origins 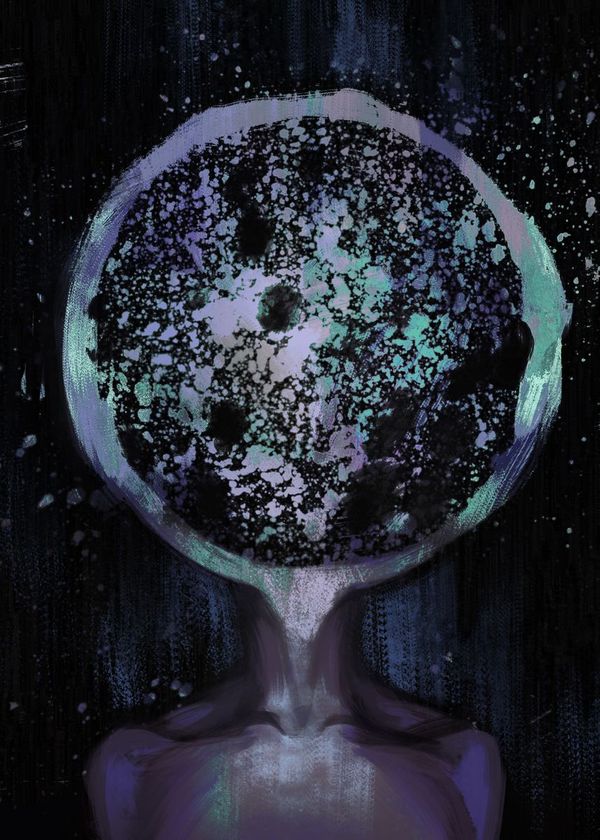