Most shows just end. They get cancelled. They finish their story. But not Community. Community rolled over one morning and realised that while it loved us, it just needed to move on. It wasn't looking for anyone else, we just weren't the one. But it was up to Dan Harmon, the creator, to break things off in the end, because Community couldn’t let go of such a great thing.

Community is a sitcom about a group of community college students who form a study group, led by fraudelent lawyer Jeff Winger. It’s one of my favourite shows of all time, maybe my favourite show ever. Sorry Mad Men. Which is not to say it isn’t flawed. My relationship with Community is exactly that. Like any good relationship it has challenges, difficult periods, and has even done certain things I would have thought to be unforgivable. But through that we’ve negotiated something meaningful.

Dan Harmon is the mind behind Community, a man intensely interested in reinventing the sitcom in as many genres and locations and possible. Harmon’s continued this thread in Rick and Morty, and will probably do it forever.

But Community is the most honest exploration of this desire. Whether episodes are post-modern homages to Star Wars by way of paintball or hyper dense critiques of CSI, almost every episode is built on a referencial conceit. This is part of what makes the episode by episode so engaging, encouraging you to watch a very long, involved interpersonal drama between these characters.

The show has gone through monumental peaks and valleys. Harmon being fired (and retrospectively agreeing with this choice), Harmon returning, cast members like Donald Glover leaving, the show being cancelled, the show picked up by Yahoo! and so on.

All of this drama and trauma and success lead to the final episode of season six: The Emotional Consequences of Broadcast Television. At this point the show has had multiple endings. Season three setting our characters off to their fate. Season five giving us closure to so many character arcs. And now, season six, the last season of a show that has had so many last seasons.

It’s fitting, then, that this episode is about the very fact that it is the last episode. The finale’s set up is simple: school is over the summer. The Save Greendale Committee sit around in silence. A sense of finality settles on the room. Elroy announces he’s leaving for a job in a different city to pursue an old flame. He’ll probably be back. Maybe. An obvious reference to the show’s own ever-uncertain future.

But this deconstruction of the fourth wall doesn’t stop the crew from going around the table to pitch their own ideal versions of season seven. These dote on the aspects of the show that have faded over the years: Donald Glover’s departure, the ‘gas leak’ year (when Harmon was terminated) and so on.

As the pitches go on, Annie reveals she has an internship with the FBI over the summer break. It makes way more sense than her hanging around Greendale for another year, she explains. She addresses the audience directly, questioning why they would sympathise or relate to her if she’s been at Community college for six years and hasn’t got her life together. But she’ll probably be back. Maybe.

Abed reveals he has a job on a film set in Los Angeles. But he’ll be back, probably. Maybe. Here Harmon has Abed address Jeff, but he's really speaking to us, the audience.

He explains that TV “has to be joyful, effortless, fun,” he says. “TV defeats its own purpose when it has its own agenda or is trying to defeat other TV or being proud of ashamed of itself for existing. It’s TV. It’s comfort. It’s a friend you’ve known so well, and for so long, you just let it be with you. And it needs to be okay for it to have a bad day, or phone in a day. And it needs to be okay to get on a boat with LeVar Burton and never come back, because eventually, it all will.”

Jeff realises he’s the only one without plans, this sudden sense he’s going to be left behind as all of these people around him move on. All of these characters will continue changing and growing, and Jeff is stuck where he is: in Greendale, as a failed lawyer. Content, sort of, but has no bright young future ahead of him. He doesn't feel young and vibrant, ready to tackle anything with a spring in his step. He’s forty. He’s single. Now that his Greendale family are leaving, who will he be left with?

He and Abed change roles now: in the first episode of Community, Abed brings this community together despite Jeff’s lack of desire. So too in the final episode, Abed has let go, but Jeff finds he cannot.

Harmon has said before that Jeff started as an unflattering author insert. A writerly way to self-therapise. In this episode he is using these characters to process his own feelings about the show ending.

Community, for Harmon, is a comfort then: the meta-lens of Abed the perfect way to process Harmon’s grief, trauma and creative identity. And this reliable, ever-present part of his life is somehow ending.

In many ways Harmon, as Jeff, now literally stands apart from the show.

Their turbulent time as showrunner and the group’s leader respectively have forced both to grow and change. But the show is essentially the same.

Harmon asks himself what it means to let go. Television, like a relationship, is an ongoing process, a living thing. It could go on forever, or our version of forever, but that doesn’t mean it should. It’s hard to walk away from this thing which has been a part of you for so long. And while Community has grown and changed, it’s still the same show it was in season one in many ways. But Harmon is not the same person he was in season one. He’s grown and changed over the eight years of the show’s run. And much like any relationship, if one person is growing and changing and the other is not, there is an eventual end-point. It can’t last forever.

There’s something transcendently bittersweet about this ending. Ending a relationship is hard. Letting go of a relationship you didn’t choose to end is nearly impossible.

Harmon’s initial disinterest in the show’s concepts, the struggles of identity, and finally returning to this thing that means so much to him are called into focus. All of that is going, forever. The study group has to leave, they can’t stay. Harmon can’t stay. And if he did, it would be any variation of the terrible pitches, the cliche season seven that’s never as good as what it was.

You can’t get back the best parts of a relationship when it’s gone. You can’t go back to what you were. Even if you did, it wouldn’t be the same: you’d resort to cheap gimmicks or dopamine hits or changes so significant it may as well not be that relationship at all. And only more heartache later as your feelings have grown ever deeper, and things end even messier.

So how do you let go?

The episode finds Jeff and Annie alone in the study room. They lament their difference in ages. But Jeff acknowledges he was able to let Annie go once before. Jeff feels his age, acknowledging he doesn't really have a future, he only has a past. Annie agrees but reminds Jeff that age and trauma are not just bad things: they equip one with skills and confidence and stability. Harmon is talking to himself here: allowing himself to acknowledge the difference between where he is, and where the show is. That the distance between them has grown over time, despite Harmon holding on for dear life.

We all move forward. As does Harmon, as does Jeff. The work is learning to accept what we cannot control, and to try to do so with grace.

Harmon uses the tag of the episode to address the audience directly in what he calls a Chuck Laurie-esque rant. He expresses his deep admiration for the audience and the show. That he does not deserve the success it has granted him, and despite knowing it’s unhealthy to hold on to this thing, he has so far been unable to move on from. Because in the moment it is truly unfathomable that there is a different life you might be living without that thing or person in your life.

Recall your worst break up. Picking up the phone to text that person and suddenly remembering you can’t. Thinking you see them at the grocery store, the bus stop, every crowd. Retreading all the things you did wrong, over and over and over in the small hours of the morning. Those first few nights of rolling over and discovering the bed is empty. Waking up alone. Again.

Harmon must grieve for Community, this unwieldy, strange thing of beauty.

If you are in pain, you cannot switch it off. There’s no magical faucet or activity to help. All we can do is surround ourselves with loved ones and remember the good parts, just like Jeff does at the bar. Like Harmon does with this script.

I can’t tell you how long the grief and pain will last. It’s been years since Community ended but this episode makes me cry, every time. Because I remember what was good, what made it truly unique and wonderful. If I stumble on a photo of that one person, I feel the gut punch and tear up all over again.

If you are standing on the oceanside, staring into the waves of pain, of the engulfing allness of heartbreak, you are not alone.

I don’t know when, but one day it will get easier.

A little bit at a time.

This story might be over, but that doesn’t mean something new and amazing won’t happen, even if right now it does not feel that way.

WandaVision is Amazing and I Never Want to Watch it Again 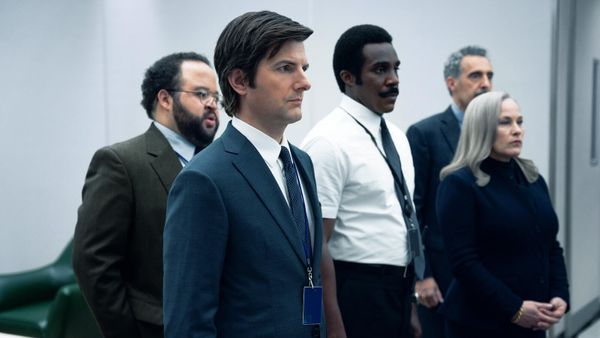 Who's Afraid of The Thought Police [ Severance x Star Trek: The Next Generation ]