Where Bergmoser’s debut series, Boone Shepard, grappled with high concept, referential storytelling, The Hunted finds itself largely frictionless. Bergmoser’s strength has always been in visual narratives — that of the screenplay. And The Hunted does not deviate.

While not always deftly handled, this story is brave and honest, an exposure of Bergmoser’s ability to craft consistent and interesting character conflict under the duress of constraint. Setting, context, location: all paired to their bare minimum.

Yet the story succeeds on the strength of Bergmoser’s voice and intrinsic understanding of tension. Maggie returns from Bergmoser’s broader writing oeuvre (Movie Maintenance, short stories), but most notable is the treatment of Allie and Frank, a duo who find themselves contrasted with the presence of Simon, a starry-eyed inner city experience seeker (perhaps an author insert in some ways).

In the now, we follow Frank, a gas station owner in rural Australia while he is caretaking his grandaughter Allie for the summer. The two struggle to get along. A couple pass through and sit down for a meal. While Allie remains aloof, Frank tries to connect with these travelers. As things grow awkward, a car pulls up from the blistering desert. A girl soaked in blood and mud tumbles from the drivers seat. Before she passes out for good, she offers a single instruction: no police, no ambulance.

In the then, a young author stand-in Simon looks for the authentic Australia. He meets Maggie, and the two travel together to a remote community of hard-drinking, hard-shooting folk. Something unsettling lies at the heart of this community, and as Simon increasingly ignores his instincts to run, Maggie comes face to face with the dark heart of humanity.

The two timelines collide in a mighty climax, and the truth is revealed at the end of a shotgun barrel.

This story is violent. Psychologically, certainly, but sometimes errs into indulging its own misery. As always, Bergmoser’s control of visual language and action is spot-on. Punches have weight. Guns rip the world in half as they discharge. The work is at his best when someone reaches for a shotgun in the mud.

Though the action sequences (a particular section set at night stands out) threaten to overstay their welcome, the story hard-cuts before they ever grow tiresome.

This careful scene slicing and dicing becomes the core structural feature of the text.

Without spoiling anything, a moment presents itself where we might pull our camera lens back to reveal the disgusting, brutal truth behind a certain farmhouse. Where the rest of the novel flashes back to provide context, this moment is allowed to stand by itself, and we’re forced to fill in the blanks with our own awful imagination.

Occasionally the action demands a different kind of restraint, one that lies in the realm of the editor, that seems occasionally absent. This novel has been edited for commercial publication (we should expect more from our big houses, and we will leave it at that).

For an action-packed thriller, the woman behind the curtain with the red marker seems to excuse far too much passivity. To be clear: this is just not the author’s responsibility but hampers what is otherwise a powerful, deliberate voice.

Flipping to a random page (I landed on 111) I can find 10 passive sentences out of a total of 19. While not as egregious throughout, for a fast-paced, punchy-thriller, the prose surely does not consistently reflect the plot.

This occasional lack of control bleeds throughout the rest of the text more subtly.

As an example, the story uses the structural choice of scenes that alternate between “Now” and “Then” — these two chronologies synchronize at the tail of the book’s fourth act.

This creates a brilliant tension. As the pieces of the puzzle start to fit together, time contracts. This executes on an ending that is surprising yet inevitable. It’s a brilliant device, executed with more elegance than it’s television counterparts like Westworld and Final Space.

Except there is a third aspect of chronology at work.

Almost once a scene the point of view character will flashback to some aspect of their past. This ranges from brief, throwaway thoughts to multi-page diatribes. While providing crucial characterization that helps us care more about our core cast, it leaves the story with a strong sense of interiority at odds with the plot.

While this never damages the pace or story, it can be distracting in a way that’s hard to identify. Maggie’s flashbacks provide sharp, clear motivation and paint the picture of a traumatized young woman, and helps us understand both how and why she is so very capable of great violence.

These moments are akin to Max’s fleeting visions of the past in Mad Max: Fury Road. Which feels an apt comparison in many ways, as both texts seek to explore the inherent cosmic violence of the Australian landscape.

But where Mad Max only shows us our most violent protagonist’s trauma, The Hunted almost gives us too much of our supporting cast’s lives via flashback. This robs much of the story’s subtext and tension, instead of feeling the need to explain itself to us, the reader. It never feels condescending but coupled with a lot of telling rather than showing, it makes me wonder how much of these flashbacks were added post-mortem at the behest of the editorial powers that be.

Rather than allowing us to see how these truths might be revealed in conflict and tension with other characters, we just learn more about our cast in isolation.

The exception might be Greg, an over-the-hill account executive of some sort stuck in the middle of the story’s central siege. Curled up in the storeroom literally pissing himself, he reflects on his life. His flashback provides him a Dennis Nedry like quality and paints a believable coward who sucker-punched an employee and then had the employee fired for it. He’s a great foil for Frank and Delilah, and it makes perfect sense he would think back to his past mistakes in this moment. Given the choice, I would love to punch Greg, so Bergmoser has done his job very well indeed.

I would be remiss not to address the setting, and consequent masculinity, a character of its own at work here. The deep heartland of the outback is painted with brilliant care — you’ll find this comment in every slice of marketing for the novel, and for good reason. The text draws attention to the subtle tension that lies under the skin of our great sunburnt nation.

The vastness of the outback is a key feature of the story. But unlike Waltzing Matilda fiction, The Hunted accesses the more insidious aspects of Australia’s ‘bloke’ culture.

The silent, malign sexism of Australiana takes physical form many times throughout The Hunted.

Whether it’s a barfly asking Charlie how he ‘bagged a shiela looking like he does, what’s his secret’ or the leering of the male gazes on Maggie, Bergmoser paints an unflinching critique of the Aussie Bloke.

Slamming tinnies, shooting pigs, and riding in utes is a demonstrable affectation in The Hunted: our characters dismiss these kind of people as “just country blokes” in an attempt to excuse their not-so-subtle predatory sexism.

There is nothing glamorous about these scruffy, flannel-wearing blokes who only discuss Maggie as an object to be owned or fucked.

Simon, our initial point of view character in the past, embodies this critique curiously. He’s a ‘soft’ Melbourne city kid with a degree who struggles in the face of this overwhelming masculinity — to the point where it ultimately leads to his end. But Bergmoser does not admonish Simon for his cowardice. The opposite, in fact.

Simon’s suffering at the hands of the setting is a result of Maggie dismissing the obvious predatory sexism of the community, and she even admits this to herself.

The text does not offer a solution to this underworking of our culture, but acknowledges and calls attention to it, perhaps hoping that the very type of man who may read a violent thriller about the outback may see a little of himself in our bad blokes.

One can only hope.

The features of excess have followed Bergmoser around and seem to be here in their deliberate, bold colours.

Once the framing device of now/then dissolves into the present cutting between our POV characters grows indulgent and scattered, feeling more hummingbird than heart-pumping at times.

I am nit-picking, in some ways, because the novel is so damn good. That it falls short of being truly great is frustrating because the bones of brilliant work have been laid down by Bergmoser. Without insight into the writing and editorial process, it’s hard to approximate the source of these symptoms.

But for all that, I enjoyed the novel, from cover to cover (in one sitting, it truly is impossible to put down). Bergmoser succeeds, once again, and seems to intuit story on a level most authors will watch and gawk at.

A great read that could have been transcendent with a present editor.

Why It Took Us 8 Years To Publish A Book 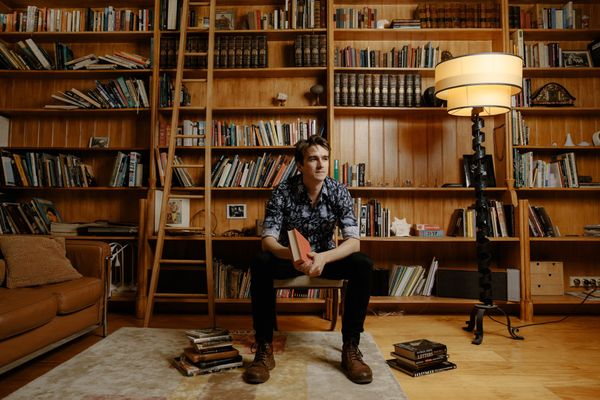 Our Flawed Masculinity: 'The Hunted' Deep Dive With Gabriel Bergmoser

Maynard Trigg: A Spoiler Filled Discussion With The Author